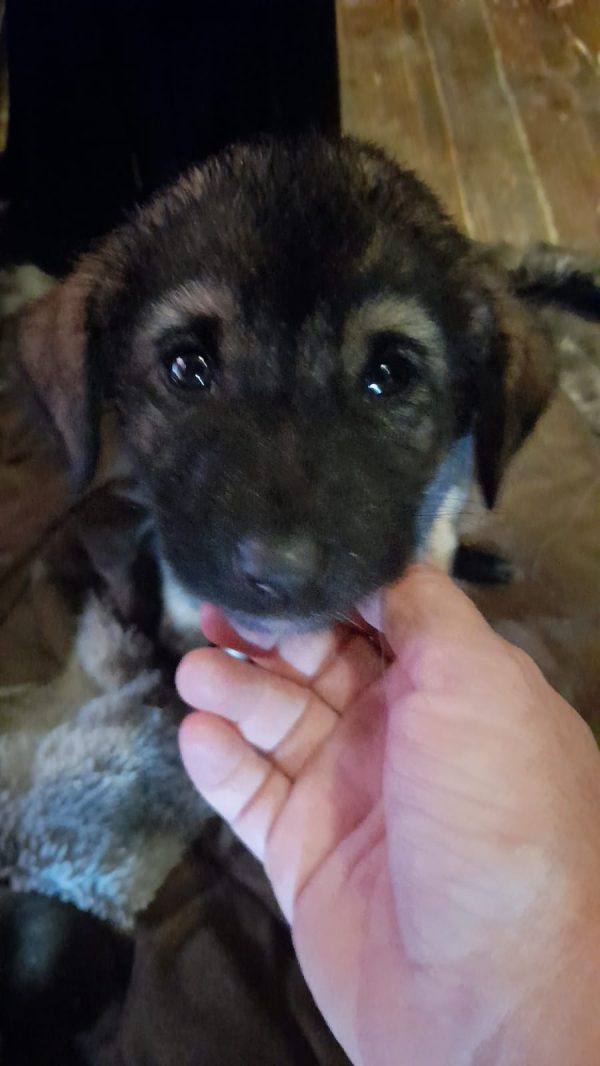 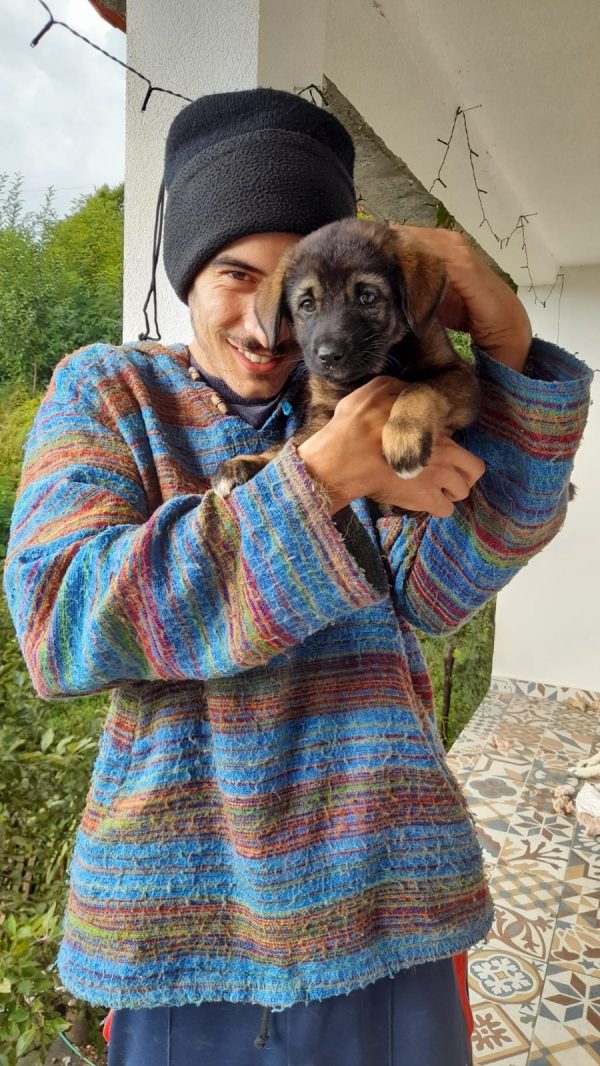 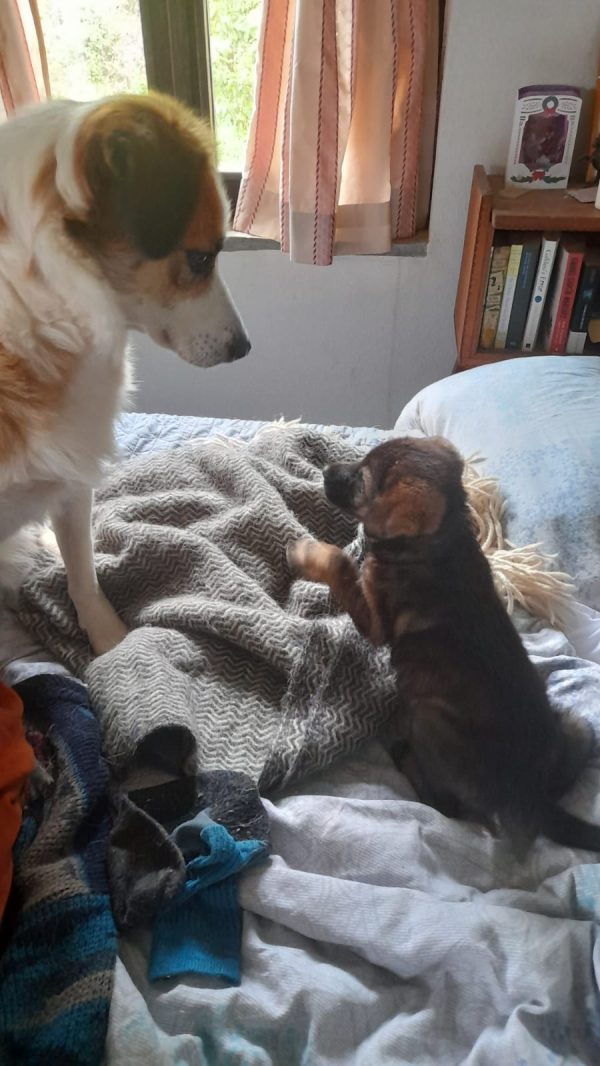 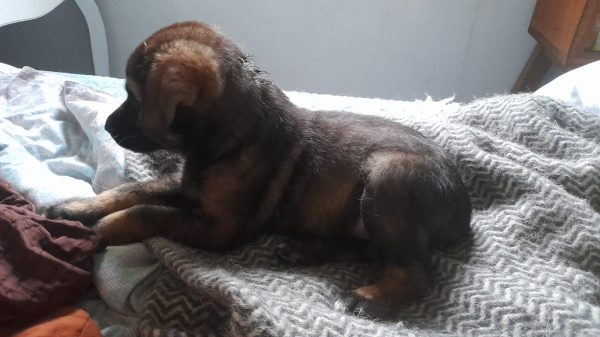 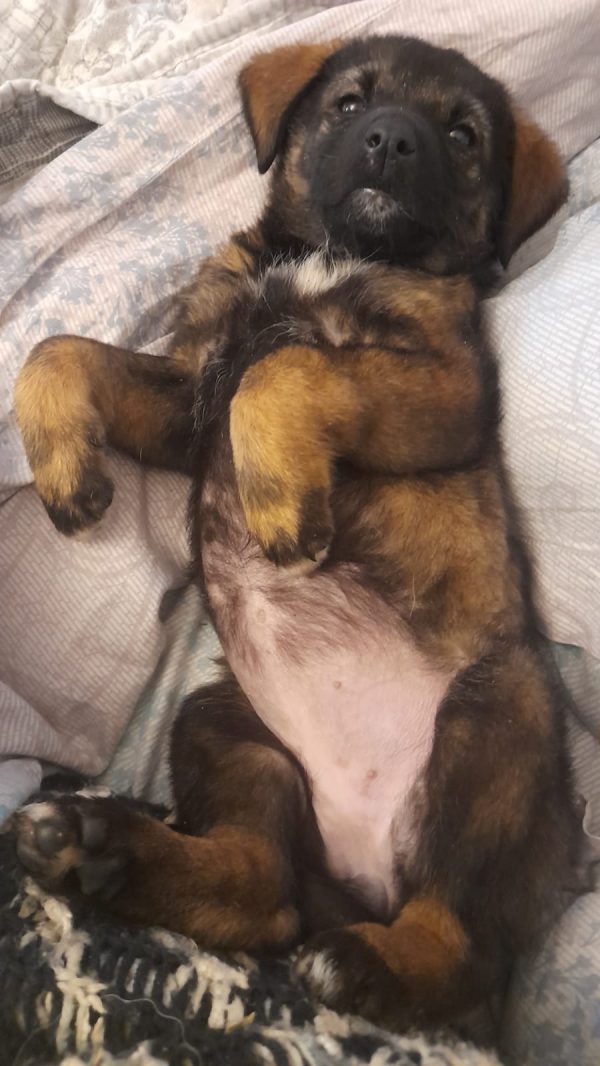 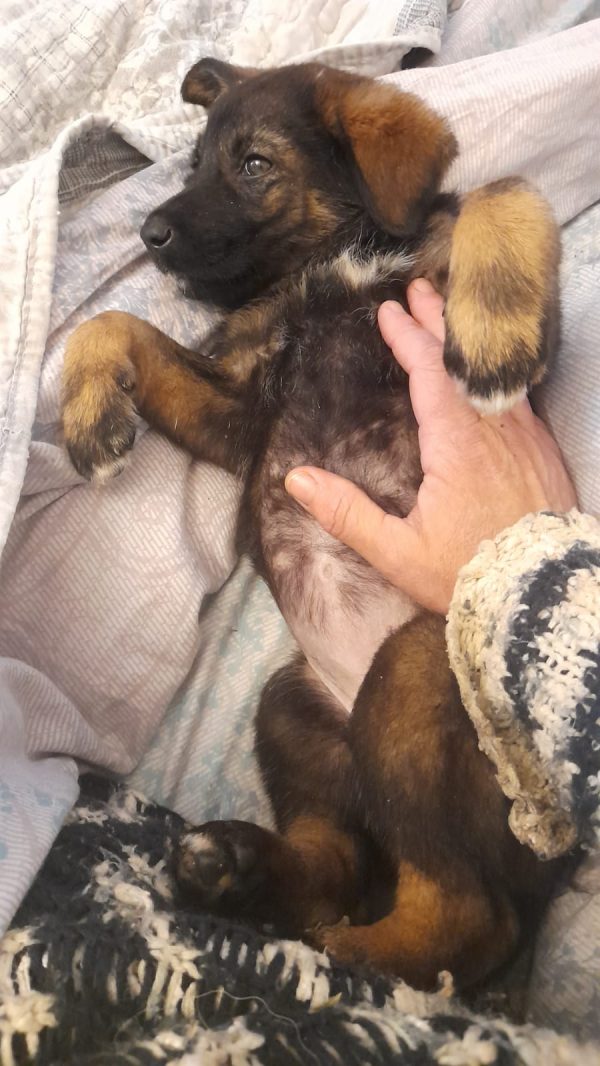 Moxi is looking for a loving home, where they let her sleep on the bed.  She is an 8 week old female puppy, who is (staggeringly) affectionate, trainable (yes – already!), and...

As of 1 October she is an 8 week old female puppy, who is (staggeringly) affectionate, trainable (yes – already!), and super-communicative.  Working with KOSAW vets in Gjakova, we’ll make sure she gets all her vaccinations, an EU-worthy passport, foster her while she clears her rabies tests AND do whatever we can to get her to your door!

Two days ago, a couple of local children showed up at our shop, holding this tiny, starving, and (at the time) incredibly bug-ridden puppy at arms’ length.  “We brought a present for Jon-Jon!” they announced (Jon-Jon is the ancient, and largely toothless street dog who’s taken up residence in our shop, where we all sort of pretend he’s our ‘night watchman’).  Well, she crossed my threshold, and in local culture that makes her a guest, and means she gets my besa.  So I don’t really have any choice but to do my best by her.  This means:  I brought her home, gave her a good wash with flea shampoo, let her sleep on my head all night, and am now trying to find a good home for her.

I just really, really hope that somewhere out there in the world, there’s space for her, and she can be the brilliant young ambassador of a new adoption program.

Where’d she get her name, anyhow?  It’s MOXI (or Moxie, but in Albanian that would come out Moxi-aye, so we left off the last e).  It’s one of those words my Gran used to use.

And it definitely suits her.  Despite the fact that most of the dogs at the house were appalled by the introduction of (another?!) puppy, Moxi doesn’t let it stop her. 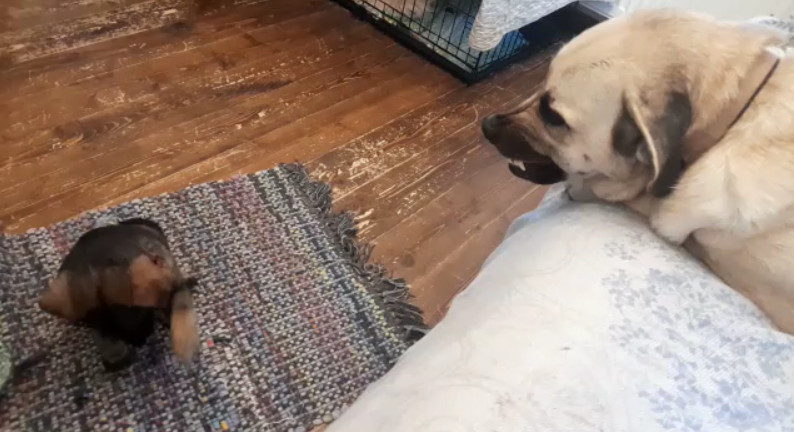 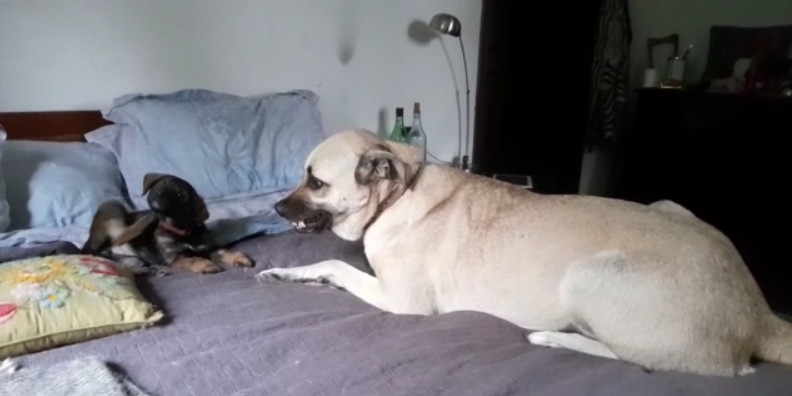 #2  Okay, Moxi made it onto the bed, but Ana still hates her. 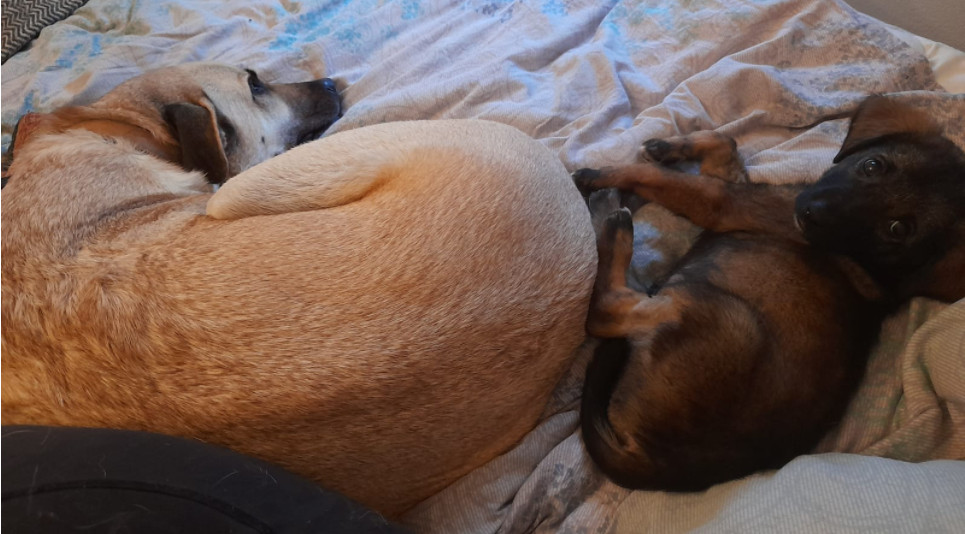 #3 Ana gives up, and Moxi does whatever the heck she wants.

As if Moxie didn’t have enough challenges (Dear god, I seem to have been born to a street dog in Bajram Curri.  Dear god, I’m covered in fleas and mites, and chock full of worms.  Dear god, my mother has abandoned me, and I’m wandering around, barely able to walk, in freezing monsoon rains.  Dear god, I’ve been picked up by a 5-year-old little boy, who’s carrying me like a (very small) sack of potatoes.  Dear god, I’ve been deposited at a shop, where this weird woman has stuffed me in a basket.  Dear god, I’m being shampooed!  AND sprayed with something that smells horrible . . . )  She came down with parvo virus.  At first signs, which unfortunately I know only too well, I rushed her off to the veterinary hospital in Gjakova, where they kept her for a whole week, battling to bring her back from the brink of death.  They kept her on IV drips of antibiotics, glucose and vitamins, as attested to by her 4 shaved legs – not so easy to put a needle into the veins of such a tiny dog.

But!  (That’s dog’s got moxie!) SHE GOT BETTER!  And so I brought her home again.

More weird proof that this dog is bizarrely special.  I have no idea why the idea of the name “Moxie” popped into my head – it’s an old word in American English that I’ve never heard anyone but my grandmother use.  I was, however, just searching for an explanation of the medicinal uses of the highly valued (and globally endangered) Yellow Gentian (Gentiana lutea) and came across this:  “People use gentian root to make bitters that are added to some alcoholic drinks. It’s also an ingredient in Moxie, one of the oldest brands of soda in the United States, which is known for its bitter aftertaste.”  In 40 years of American life, I never came across this soda.

Anyhow, six-degrees-of-separation weirdness aside, I’m proud to report that Moxie’s legs have put on a growth spurt, and she now looks more like a gangly almost teenaged-puppy.  She’s also figured out how to climb onto the bed, which I’ve never known ANY other dog to do at such a young age.  Moxie is SMART.  She is also, as her name implies, simply stubbornly, fiercely determined.  “Dammit, I WILL get onto that bed!”  She’s way too small to jump onto the bed, but she’s figured out that if she goes around to the backside, and stands on the lower shelf of the bedside table, she can just, Just, JUST get enough traction to claw her way up.  MORE importantly, despite all the effort and struggle this involves, she will STILL jump OFF the bed (most often face-planting on the wooden floor) to PEE.  Good dog Moxie.

She ALSO insists, no matter how little anyone wants to, that EVERYONE play with her.

This is now part of the daily routine.  Ana sleeps on the bed.  Moxi chooses – to my amazement – to sleep on the floor, next to the bed, on a little carpet.  As soon as Ana goes off in the morning to bark at the world, Moxi claims her space and Bodi (the dog above) jumps on the bed for a romp with Moxi.  I try not to spill my coffee, and insist that I don’t want to play with them.

Anyhow – as is probably become clear, Moxi is rapidly becoming family, so I’m resigned to having another dog.  But you can keep following her adventures, to see WHY adopting a Tropojan puppy is such a good idea!