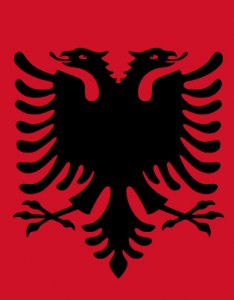 You must remember that in these mountains we have never been conquered by foreign governments. The Roman Empire claimed to have overpowered Albania, it is true, as later the Turks did, but neither Rome nor Constantinople was able to send its government into these mountains.
– The Bishop of Pultit, quoted by Rose Wilder Lane, from The Peaks of Shala (1923)

A (highly subjective) History of Albania in General

Albanian heritage is generally traced back to the ancient Illyrians.  Back when Herodotus was writing, the Illyrians were your run of the mill, fiercely independent local people.  Perhaps fiercer than most, as they ended up taking on the Romans (mostly through actions piratical) and not unpredictably, losing.  The Romans gained their first foothold on the other side of the Adriatic when they defeated Queen Teuta in 108 BC, finally conquering the Illyrians altogether in 168 BC when they defeated King Genti at the stronghold of Rozafa Castle, which nonetheless still stands, 2000 years later, outside of modern Shkodra.

Notably, the strength of this root in ancient culture lives on in the Albanian language (or ‘shqip,’ as they themselves name it) which is one of those peculiar indo-european languages which bears little resemblance to any other living language, and which can only reliably be said to be related to Thracian, which, as far as I know, hasn’t been spoken for Quite Some Time.

The Roman period seems to have been good for Albania (which is what the Romans dubbed it).  Some pretty fine roads were built, including the Via Egnatia, a grandly-conceived raised stone walkway beginning in modern Durresi, connecting the Albanian coast with inland Grecian Thessalonica, which can still be walked in a pleasantly crumbly way today according to Jason Goodwin.  Famous Roman visitors included Julius Caesar, Octavian (later the Emperor Augustus), and some random friend of Cicero’s who lived (t)here.

After the Roman empire split (around 395AD), Albania fell under the aegis of Constantinople, thus ultimately becoming part of Byzantium.  Thereafter things get a bit hazy in my mind: Visigoths, Ostrogoths, Bulgarians – who didn’t tramp across Albania?  The Byzantine Emperor Justinian refortified Dyrrachium (our modern Durresi) and Tirana somewhere in the 6th Century AD.  Didn’t stop the Bulgarians.  In 1018, the Byzantines reconquered.  Plif.  The Normans under Robert Guiscard took it from Vlora in 1081.  Enter the Venetians, who aided the Byzantines to take the whole sausage back in 1083, in return for certain outrageous favors (of course).

Get to the 14th Century, when the next most significant invasion (from the perspective of modern history) happened:  Albania gets invaded by the Serbs, under the great Serbian king, Stefan Dusan.  Somehow, under the chaotic conquering of the Serbs, the more-or-less modern form of
Albanian cultural self-government took shape.  To wit, strong local family rulers, fiercely governing their own particular balliwicks.  When Dusan died in 1355, this network of independence is what remained to characterize ‘modern’ Albania.

What happens next?  The Ottoman Turks arrive.  This gets a bit complicated.  The Ottomans were invading the Balkans at the same time as they were laying siege to Constantinople.  The great and famous, history-scarring and Balkan-forming battle of the Field of Blackbirds happened around this time.  In Albania, the Ottomans encountered possibly the most significant figure of Albanian history:  Skanderbeg.

Okay:  Who is Skanderbeg?  Considering that he lived and died in the 15th century, it’s amazing that he’s still so living and prevalent in modern Albania.  He is possibly one of the only human beings I feel simultaneously actively fond and terrified of. 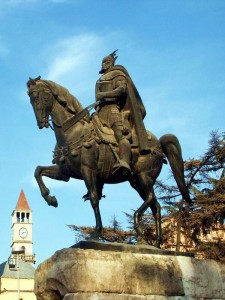 Gjeogj Kastrioti was the child of a traditional Albanian family of overlords based at the fortress of Kruja, also still standing, and vastly visible, an hour to the northwest of modern Tirana.  He was taken as a child by the Ottomans and raised to be a peerless fighter.  As he was a very good warrior (and coincidentally enormous), he was given the honorific name of “Skander” (after Iskander, or Alexander, the Great), such name being further appended with the honorary Bey or -beg.  Hence:  Skanderbeg.  The Serbian holdings being testy and generally rebellious, the Ottomans sent troops under Skanderbeg back to the Balkans.  Big mistake.  Skanderbeg was no sooner back on home territory, than he raised the flag of rebellion and proved himself singularly capable of uniting the quarrelsome Albanian over-and-warlords.  So much so that under his leadership, the Albanians held off an unprecidented 14 invasions by the Ottoman Turks.
All of this was more than 500 years ago.  Imagine, if you will, the pride that modern Albanians still have in this remarkable man.  In 2009, standing about on the deck of a ferry traveling from Bari to Durresi, I met an amiable Albanian man, who delighted in quoting to me Gjeorgj Kastrioti’s height to an inch, the weight of his shield, the weight of his sword and the stunning weight of his helmet, all of which I’ve now forgotten in exactitude, but remember precisely in terms of admiring horror.  Not to mention the fact that I drove past, as almost everyone on the main road to Tirana must, the Corinthian temple where Skanderbeg’s helmet (goat-headed and stag-horned) and massive sword lie to this day, visible across a wide valley, open to both the elements, and the admiration of all.  He was a fearsome man, a mighty warrior, a desperate optimist, a great uniter of men and a noble figure.  He died.  And everything fell apart in his wake.
The Ottomans conquered Albania.
Overall, the Albanians didn’t fare so badly.  Typically big, strong, and fearsome, they were good at being invaluable to their Ottoman overlords.  Under the Ottoman law of devshirme, Albanian families gave up one of their sons to Ottoman service, and these children not infrequently rose to eminence.  Ottoman rule is punctuated with Albanian warriors, leaders and viziers.  Most remarkable perhaps is that given 500 years of this sort of thing, Albanians never lost their independence, sense of self, or autonomy.
But go on, it doesn’t end there.  What happens next?  The tumultuous 20th Century, of course.