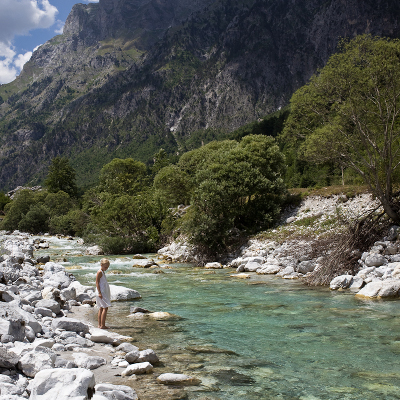 Water:  In towns, Uji i Zi (‘Black Water’ aka: sewage) management is pretty rudimentary – therefore, Albanians don’t drink city or town water, and you probably shouldn’t either.  In the countryside, the location of houses is mainly decided by proximity to a drinkable water spring, so water is actually safer and fresher the more remote the house.  In general, villagers will know which water is for people, and which is only for animals.  On the other hand, no rural water is treated in any way, so for sure there are ‘friends’ in it, and if you have a sensitive stomach, you might want to stick to bottled water, which tends to be sold everywhere for all of the above reasons.  Valbona water is actually famous for its purity and taste – Albanians, also for foregoing reasons, are ‘water connoisseurs’ and really, really picky about it!  Valbona water does however have a very high calcium content due to the surrounding limestone, so if you’re prone to kidney stones it might not be for you (unless this is totally garbage medical information which I have garbled up somewhere?).

Money:  Albanians are very enthusiastic about currencies, and you’ll probably find that most places are happy to take most major currencies (and even some weird ones) – most people have access to current rates through telephones, so it’s not like you get bilked or anything – it’s more of a national past-time.  Maybe because of so many Albanians working overseas (‘foreign earnings’ is a top income item in the national budget). And likewise everywhere takes euros.  There are also exchange places in major cities with better rates than banks – just make sure they are not charging a ‘commission’ (most don’t).  Also major towns & cities have “bankomats” which give out lek (probably at a crappy rate though).

Weather:  Look here for my highly subjective opinion on when to visit Valbona, and for what.

Whether (or Not) to Drive Yourself:  Whether or not to drive here probably depends on your “idea of fun.”  A LOT of work has gone on in recent years on asphalting roads (for better or worse – sometimes I think it would be better to have left some areas less accessible – sigh).  But geography demands that the roads are very twisty, sometime narrow, often with big drops – and cows wandering around, even sometimes on the highway.  Also guys driving the wrong way up the shoulder of the highway because the idiot road builders forgot to leave them access to their house from the other direction . . . . etc etc.  AND Albanians are Maniacal passers at highspeed on curves where you can’t see what’s coming – that can be annoying close to cities . . . but other than that it’s all fine.  Oh, except for the falling stones . . . I dunno.  I’ve always enjoyed it!*  Even the guy I spotted with a cow crammed into the back of his minivan . . . the whole back window was just cow butt.  Also, because of the rapid pace of road building, there’s almost no accurate road maps – even Google Maps can be wrong (like about the border crossing NE of Cerem at Qafa e Vranices which in point of fact absolutely doesn’t exist).

In addition: Moving around the North, a car can actually be a bit of a bother – especially if you want to cross to Theth – you’ll just end up leaving the car in Shkoder, anyhow.  Some explanations about that are here: http://www.journeytovalbona.com/your-journey/valbona-theth-komani-the-great-conundrum/
*But then I learned to drive in NYC – which is even WORSE!  ha!

Valbona vs. Theth:  This is always tricky for me since I live in Valbona, and have really spent comparatively little time in Theth.  However, my sense is that in Theth you can either do very ambitious hikes (like up Maja e Arapit – or north to Qafa e Pejes) OR you can spend 1 or 2 days doing nice little local things – like Grunas Waterfall and the Blue Eye which are not long walks, but nice to laze around by.  So either 2 nights in Theth (one night arriving, one full day pottering around to waterfalls and looking at the lock-in tower) or 3 could be fine.  Valbona has 2 advantages:  1) it is 4 times as large as Theth, so there should logically be more hiking to do here and 2) Valbona has Rilindja, which I am realizing is actually something quite unique in Albania.  Why?  Well first of all, we do have the BEST maps and information for the area (and for anything else that affects us – like boat schedules, recommendations for other nearby places and help planning itineraries – all of which we hope soon to turn into a ‘proper’ Park and Tourism Center).  And also because Albanian culture is not so big on comfort – or the productive wasting of time (ie, spending a day lying around reading).  Basically I am noticing that even with fancy hotel rooms, when our guests don’t want to go hiking they seem to gravitate here, to our balcony upstairs which has tons of books and some sofas, a computer with wifi tucked in the corner, and a whole cabinet of blankets and pillows to drag down to the river.  So if you fancy the idea of planning a day (or more) of just relaxing, you might want to do that here, rather than in Theth – although to be fair the accommodations we recommend there do have more than ordinary levels of comfort – like Mark Zef Koceku’s house.  He put little tables and chairs in the room “In case,” as he says, “someone wants to do some studying or writing.”  Basically, both places are really nice, and I don’t think you’ll make a ‘wrong’ decision.  And anyhow, you can always come back 🙂

Racism in Albania?  There’s no taboo in Albanian culture against either staring (even for extended, face-to-face periods – sometimes I think it’s a way of expressing ‘polite interest’) or whispering, so you might get a bit of that, but as ever guests are sacred in Albania so it shouldn’t affect you in any dangerous way.  As for attitudes, I have just thought of a funny way of explaining it:  “Mos u shikoni kisha, xhamia:  Feja Shqiptare eshte Shqipetaria.”  This is from an oft-quoted Pasho Vasko poem from 1830-something.  “Don’t look at churches or mosques, the faith of Albania is being Albanian.”  Which is really very true, and I think they actually feel a little sorry for anyone  who isn’t Albanian, and view everyone else as sort of pity-able and needing looking after.  Sort of “of course you’re a little freakish, poor thing – you’re not Albanian!”

Vegetarian? [Quick copy-paste from the latest time I answered this question:]  “Is it possible to have vegetarian meals around there? I see a lot about traditional meat dishes and we don’t eat meat.”  Well we can do our best to ask for you.  People are more familiar with the concept than the days when Alfred’s mother said “Sure the soup is vegetarian – I took the sheep’s head out of it already!”  In fact very little land is flat enough to grow crops, and the growing season is short, so it has always been livestock based diet.  How do you feel about lots of cream, butter, cheese, more cream, etc?  Vegans still confuse the hell out of them, however.  “What do they eat?  Grass?!”  Basically, people are better these days about leaving out the meat, but it doesn’t mean that they are used to cooking up creative vegetable dishes.  At least, they make great stuff for themselves (meat is really more for special occassions here – I mean, you have to KILL something – you don’t do that everyday!) but they’re going to think that’s boring and everyday-ish, so may not know what to make for you.  You risk ending up with fried potatoes, cheese, and a greek salad.  But . . . let me know how it goes!