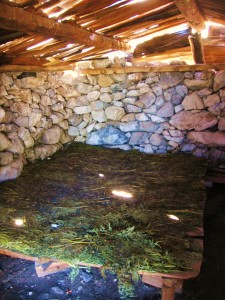 In many ways, northern Albania has long functioned as the cradle and refuge of Albanian culture.  In a region fraught for the last 100 years by questions of legitimacy based on “who was here first?” arguments, the Malësi does get chops.  The written historical record is patchy, with long centuries of silence, but linguistic evidence suggests that the highlands have been more or less continuously populated by a coherent people since the early years BCE.   The local mythology and identity certainly encompass the fact that while southern Albania succumbed to successive waves of invasion the Highlands have remained for 2,000 years (sometimes stubbornly) unsubdued.  Accordingly, the culture of the highlands is proud and independent.  Strength is valued, but so is generosity and kindness, presumably in recognition of the survival benefits conferred by intelligent and mutual altruism.

Language: One of the unusual and interesting things about Albania is . . . The Albanian language!  In Albanian, the language is called Shqip, and Albania is Shqiperia.  What?  Why?  The name “Albania” traces back to a Roman term of reference (“arber”).  Where Shqiperija comes from is less certain, although the fondest interpretation is that it comes from the word for “Eagle” making Albania “The Land of Eagles.”   Mystique aside,  it is certain that Albanian one of those fascinating unique languages, in the Indo-European family but related to nothing else.  Arguments go back and forth (fiercely!) over whether it tracks back to Illyrian or Thracian.  At the date of this writing, based on place names and pastoral terminology, the Illyrian argument is winning.  When were the Illyrians around?  In the BCEs, the last Illyrian king, Genti, was defeated at XXX in AAAA.

The BBC has a nice link, if you want to pick up a few helpful phrases.

One of the things it’s useful to know about Albania grammar affects place names.  Nouns change depending on parts of speech (subject or object) but also as general or specific.  Let’s use it for Valbona.  Valbona as object is “valbone.”  (I am going to Valbone).  Valbona (a specific place) is Valbona.  Also Valbona as subject – Valbona is beautiful.  You see this in Durres (the general term) or Durresi (the specific town) . . . . Also Shkoder vs. Shkodra, etc.  I am going to Tirane, but Tirana is beautiful.  Now you know.  Don’t let it confuse you!

Frequently Asked Questions: (Thank you Jim, for making me focus)

Tipping:  Between themselves, Albanians are extremely correct about paying each other at least a token for everything – if you get a ride, you offer 200 lek.  Much shouting and pushing money at each other happens.  No family occasion is complete without a drawn out argument about who’s going to pay (“Pasha Zotin JO!” = ‘lord god NO’) and weddings, sick bed visits and funerals all involve tucking some money in someone’s pocket.   As you are a guest no one expects you to do this, and in remote areas people may even appear to be offended if you offer to pay for meals, beds, etc.  In homes the solution to this is to point at whatever children are around and say it’s for them.  This will always be accepted.  If you get a short ride or use someone’s phone or nice help or something like that, you can always slap down 100lek (a coin) and say ‘drink a coffee’ that will be accepted too.  You might want to travel with a couple of caramels in your pocket as any symbolic gift will be respected.  In fact, this is what Albanians do with each other.  Visiting is an important social responsibility, and guests are always offered a drink of something special (juice, coffee, raki) and “qerasje” – which is a treat of candy, biscuits, turkish delight or something.  Also a gift is often sent home to mothers (sisters, etc) which for some bizarre reason I haven’t figured out yet often takes the form of a bar of soap.  Anyhow if you offer someone a caramel they will probably be delighted.  Or at least amused.  About tipping in restaurants:  there is no set rate.  Its perfectly fine to leave nothing, but if Albanians are happy, they can be very generous tippers and waiters here also work for tips.  Other Albanians (infamously guides do this) may tell you not to tip, but this is because they are trying to protect you as a guest…. There is a logic to it I guess.

Reservations:  Basically, except for popular hotels, a call the  night before is all that’s needed, and since that’s the case, no one worries about longer-term plans, and more than that, they don’t really on a fundamental level understand why you’re worrying about it either.

Maybe another way to think of it is like this:  Once you put foot on someone’s land, you become their guest, and then they have to put you ahead even of their own family, so once you’re here, people will move heaven and earth to get you whatever you need (or to wherever you want to go).  There’s a famous story about a man who kills another man, and then goes running off to hide from the vengeful brothers.  The murderer takes refuge in a remote farmhouse with an old man, and then after a bit the door opens, and in walks . . . the vengeful brothers!  But the father reminds the brothers that the murderer is now their guest, so they have to look after him.  In the morning they walk the murderer to the edge of the property, give him a some hours head start (I forget how much) and then set off after him again.  See?  Different culture.  Anyhow, this applies on a larger scale, even to the whole country.  People will drop whatever they’re doing, drive you around, give you their car keys, and in shops even in Tirana, if you don’t have the right money, they’ll just tell you to come back later and pay for whatever you’re taking.

You’re not going to get stranded anywhere.  On the other hand, you’re probably not going to have much luck arranging anything to do with transport ahead of time, either.  Put it this way:  If they would never turn away someone who asks for hospitality, they can’t really understand the idea of reservations, which implies that they would turn away someone else.  For sure they’re going to take care of ANYONE who turns up, so why are you asking for some sort of guarantee months ahead of time?

Another thing to remember is that NONE of these cities, except Tirana, is very big, so it’s not hard to find things (like bus stops) even if you have no idea where you’re going.  Bajram Curri, which is called a city here, is actually only 4 streets.  Quku i Valbones, which is called a village, is just nine houses – there isn’t even a street or a road or anything.

You can’t read much about Northern Albania without running into this ancient code of law.  The Kanun (from the same linguistic root as English canon) is a complete system of laws, offering to regulate every aspect of traditional life.  The formal Kanun is attributed to Leke Dukagini, who supposedly wrote them down sometime in the 12th century, although the kanun is certainly also a recording and formalizing of even earlier traditions.  In modern times, the Kanun is most commonly mentioned as the source of the rules of blood (gjak) feud, although in point of fact, this is only a small part of the overall and overarching vision of cultural order encompassed by the Kanun.  Travelers from M. Edith Durham to Rose Wilder Lane, who took the time to listen, understood that the kanun is a system of order.  In a harsh environment, it by necessity takes harsh forms.  But it also encompasses the ability for negotiation and allows women an unusual level of autonomy and voice.  In some ways, it’s a sad reflection of the 20th century’s admirable attempt to legislate order, that its enthusiasm hasn’t had time or energy to examine, or attempt to understand and work with, earlier systems of order such as the kanun.  This is not to say that the kanun couldn’t be improved on — of course not — but, harsh as it can sometimes seem, the kanun is a system of law, which evolved and  functioned for hundreds of years, and it would be interesting to see what an enlightened adapting of an already respected system could achieve.