The path to Theth is open (as of a week ago) and also horses can cross it.  Still snow around 2000m though so not terribly safe.  The trailhead is in the small village of Gjelaj e Rrogamit.  Starting in 2018, exciting new trails are being developed from here (to Jezerces, a spring fed pond at 1800m, the pass to Curraj i Eperm) and a new map has been printed (available at our SUPER new Tourism Center in Bajram Curri, through this website OR at select Guesthouses in the valley like Rilindja) so you might want to think about staying here for a night or two and doing some exploring.

Ceremi Path – As if the “Horrible Hole” weren’t enough to deal with, Horrible Hydropower have destroyed the bottom access of the trail, as well as 80m of the top of the path.  Personally, I’m giving this one a miss this year.  Instead you can either hike up the short cut from the Maja e Gjarperit trailhead further east, and then walk up the car road to Cerem, OR you can go up the Lugu i Persllopit trail and hike around behind Kollata.  Although there will still be snow up there.

IN CEREM:  BEWARE of an evil guy named Bajram.  Or Riza (he also calls himself this).  He’s been awful the past few summers.  His house is the first on the road when you enter Cerem from the south – and he’s trained his children to watch for tourists and drag them into his house, telling them all kinds of lies: That Berti’s is closed, that he IS Berti, no wait, he’s Kujtim Gocaj, etc.  Do NOT listen to this guy.  He also tries then to charge people 20euro for coffee and insanity like this.   At the moment, Kujtim Gocaj’s (wonderful) house is the only one operating in Cerem which we recommend.

The Short cut up to the Ceremi Car road may be over grown with Bracken.

Posts are up near Gjarper peak and in Stanet e Milloshit, but the signs have not been put up yet this year.

Trailmarking towards the Stan of Cen Doci (on the way to Mulosmanli) isn’t really there yet.

We are also working to mark some new trails going up the Milloshit river valley, to get to Cerem and Markofshe (Doberdoll) that way.

Trail junction signs are in the process of being replaced.  Although the POSTS have been up since 2017, we’re still (painting and) putting up the actual signs.  On 6 August, we put up the signs for the first two posts on Maja e Kollates (Galeria and Bregu i Rrethit junctions).  Last week we replaced the signs in Kukaj and at the Maja e Jezerces Junction. 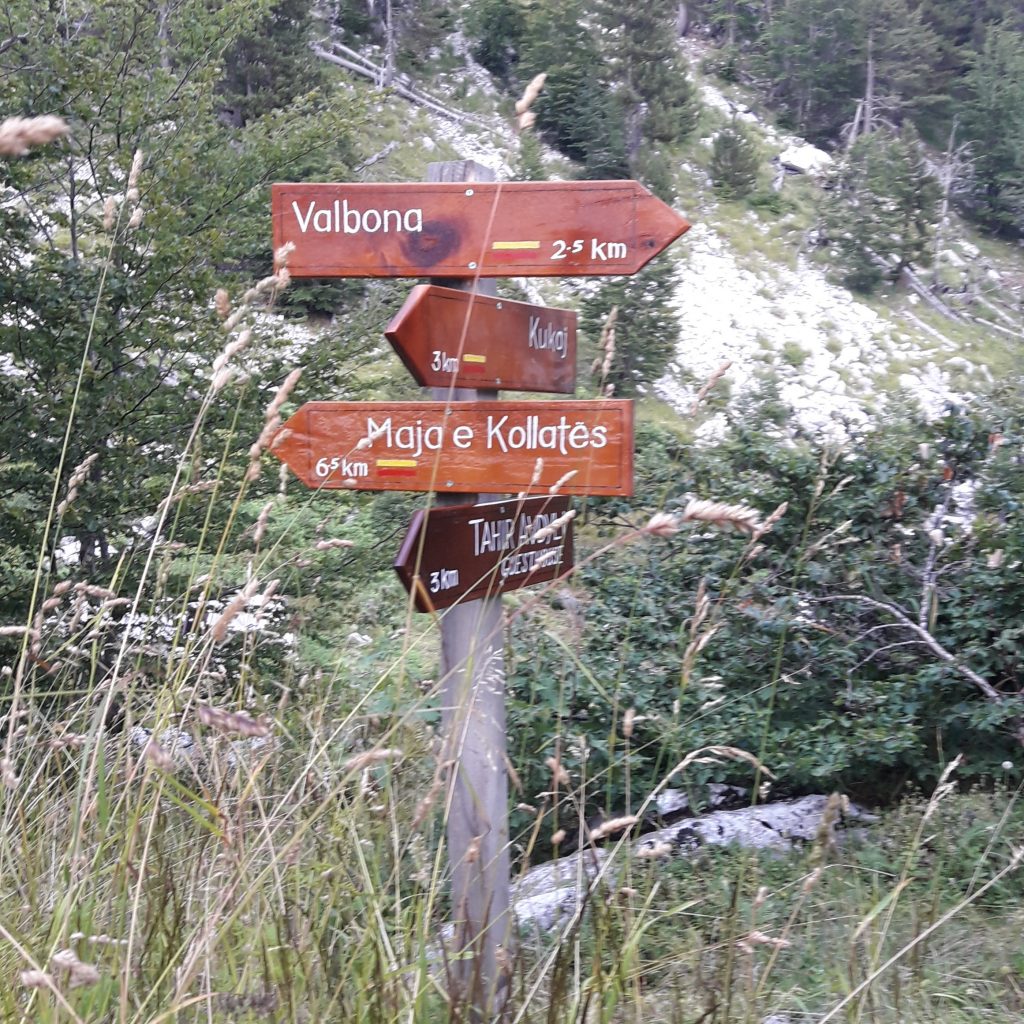 Bears have destroyed the signposts for the bottom of the Shpella loop, but the markings are good so you can still find it.

WARNING: June-July is most dangerous part of the year for going up there as new bear-mamas are bringing their cubs out of dens for the first time, and are very nervous!

Guri i Stokes view point: This was blocked by the evil HPP last year, but is now accessible if you approach the guard’s little hut thingie, and then turn to your left just before it.