Starting from Shkoder or Tirana, arrive in Valbona via Komani Lake Ferry/Buses
Ask to be dropped off at Rilindja, where you can take a room or camp.
[Options: Ask instead to be dropped off in Motina, and hike the 6km (2.5 hours?) along the river to arrive at Rilindja. You can even have lunch first at the home of Klodian Ismalaj in Motina valley.]

Elev. Gain: 500m
Km: 5k
~ 3 hours hiking
This assumes you just hike back down along the river, cross the foot bridge at Relax, and then walk down the road 1 km to the Maja e Gjarperit Trailhead, where you pick up the short cut and then 4×4 track to Livadhet e Gjarjperit – but that’s a pretty short day. It’s just that Livadhet e Gjarperit is a really magical place, so worth the short day for the sake of staying there.
You can mix it up by instead crossing at Relax, walk around the corner down the road to the Cerem Trailhead, and then hike 2 hours up the trail until you meet the dirt road. Then you can walk back down again, and pick up the 4×4 track to Livadhet e Gjarperit. Altogether this should take you 4-5 hours.
Sleep in the Stani i Arif Kadris – kind of like visiting Heidi’s Grandfather. A working Shepherd’s summer sheep farm.
[Options: You can also camp at Arif Kadris’. If you get to Arif Kadris’ early, you can help with the farm stuff, or spend the afternoon exploring along the marked paths to Milloshit]

Elev. Gain: 1000m
Km: 11k
~ 8 hours hiking
Now you’re REALLY hiking. Leave Arif Kadris’ and follow the marked path up a stupendous switchback to the 2000m plateau of Gjarper Mountain. A 2km, 2 hour side path takes you up to the peak of Gjarper, where you have full 360 views of . . . nothing but mountains. It’s here where you get a real sense of just how wild Northern Albania is. Carry on the track and descend the other side of the plateau, through some very nice fir forest (marked!) to arrive in Çerem village.
Sleep in Çerem either at Goçaj “Hotel,” the guesthouse of Berti Isufi or the Homestays of Dem or Avdi Isufi. Remember there’s no electricity or phone signal anywhere in Çerem.

Elev. Gain: 800m
Km: 7k
~ 5 hours hiking
Here’s the first night you HAVE to camp according to this plan (unless you either don't mind missing out the peak of Kollata, or are Super Hiker, extreme class). Leave Çerem and hike an hour or so through some really lovely beech forest. Near the stans of Derzhane you emerge into the “Bjeshk” or alpine meadows above the tree line. Derzhane is home to about 10 families and several hundred sheep in summer – all with no electricity or phone signal. Continue on through the pass at Qafa e Borit, and sneak into Montenegro. From here until you return to Albania at the pass of Qafa e Persllopit, the trail is somewhat marked by the Montenegrins, who have also marked the path to the Peak of Kollata that you’ll use tomorrow.
Camp wherever you like near the pass. Remember that there’s probably no water, and as you’re above the tree line, no wood for fires.

Elev. Gain: 500m
Km: 9k
~ 7 hours hiking
Take the morning to hike up to the peaks of Kollata “e Keq” (Bad Kollata – the highest mountain “in” MNE) and Maja e Kollates (the absolute Peak of Kollata) in the morning, then return back down the way you came to Qafa e Persllopit, and then carry on down the path from Qafa e Persllopit to pick up the Rrethi i Bardh trail, cross and descent to Buni i Brahimit. The last downhill bit looks pretty impossible when you're teetering on the top of this 500m steep and grassy descent with no visible path, but if you strike out left and make your own switchbacks, it's actually really do-able until you hit the footpaths at the bottom.
Camp at Stani i Ram Avdylit. There’s usually water available here (although it can dry up in August & September if the snow melt doesn’t last, so be prepared to pay something, even though they won’t ask, and will try to refuse) and you can also buy firewood.

Elev. Gain: 800m
Km: 6k
~ 5 hours hiking
A gentler day, but with the promise of electricity and showers in the evening! Start from Ram Avyduli’s in the morning to tackle the Peak of Rosi, then pick your path back down to pick up the path to Kukaj.
Sleep at Tahir Avdyli’s 150 year old farm-Guesthouse.

Elev. Gain: 1600m
Km: 5k
~ 8 hours hiking
Hike from Kukaj up to the Peak of Jezerca. Once you get back up to the turn off (half hour) the route passes through some young beech forest, where there’s no discernable trail. NOTHING is marked. Until trails are successfully marked, you probably need a guide for this part (Tahir’s sons can do this), or to be very good with GPS (and prepared to spend a lot more time finding the path). There is just ONE route that switchbacks up the sheer cliff face at the end of the side valley, so don’t count on blazing your own trail. But once you get up there? Welcome to Moonland! The last 400m of ascent to the peak involves some really dodgie scree. It isn’t officially climbing, but it definitely involves some scrambling and a bit of rock climbing nerve.
Camp 400m down from the Peak (or I guess you can try to sleep up there, if you’re nuts). Once again: no water, no firewood. Also no phone signal, so if you get into trouble, you’re . . . . in trouble. As the highest peak of the entire Dinaric Alps, Jezerca tends to be cold at night!

Day 8: Jezerca to either Theth or Valbona

Elev. Gain: mostly down hill
Km: 6k to the first Guesthouse towards Valbona, 10k to the center of Theth
~ 3-5 hours hiking, depending
Take the Lugu i Valit path 4k to meet the Qafa e Valbones trail. Turn W for Theth (+6k), E for Valbona (+2k) to the first guesthouse in Gjelaj (Danjel’s).
[Optional: From Jezerca you could also head N and get to Theth via the Qafa e Pejes path, OR even spend a night at Jezerca Lakes and then come back to Valbona via Pirimida 18 & Kukaj, or to Theth via Qafa e Pejes] 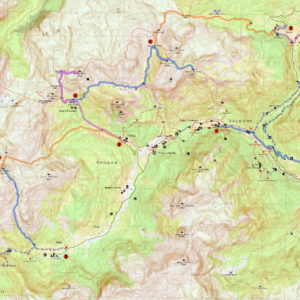 This is a tour which I really like, as it shows just how much there is to do in Valbona – you can spend 8 days hiking in the mountains, and hit 4 peaks including Kollata, the highest peak of Montenegro (which weirdly, is actually in Albania) and Jezerca, the highest peak of the whole Dinaric Alps (from Slovenia south – this is the One!), without ever coming down – and not mess about with border crossing permission!  NB:  If you want to do the whole thing, there is some camping needed – without access to water or firewood, although most nights you can stay in homestays or stans.  This is great for hard-core camping hikers, who don’t mind a bit of poking around to find the way.  You probably need a guide on the last days.  Absolutely not recommended for Children (unless they’re super-precocious and self-sufficient).

As ever (in my world) the object is not to rush through, so there are some days which are less strenuous than others, and more, um, forceful hikers are welcome to collapse days and/or speed through some of it.  But the route is good.  Not all of it is marked yet, so despite my modest time estimates you (entrepid explorers) may still spend a bit of time wandering aboot.  But I’ve indicated the only time I think you REALLY need a guide.  Although, make no mistake, this is wild hiking in some places, particularly given the lack of telephone signal in a lot of it.  And yes, why not, you also get to “sneak” in and out of Montenegro – y’know, just for some bandit fun.

Also, you can obviously tailor this.  The map shows where there are trails coming down to the valley (and ‘civilization’) again, so feel free to extract as many days as you want.

If you want help booking this (in terms of arranging reservations at the guesthouse/homestays and the guide we think you might need, and other bits and bobs – like firewood in Buni i Brahimit), and making sure you reappear!, it will probably cost out around 200€ per person for 2 people.  But obviously, in 8 days there are a lot of variables, especially if you don’t do the whole thing.

Then of course there’s the Southern side, but more about that, later  . . .